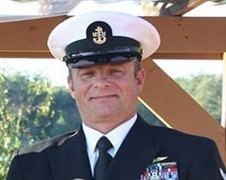 A native of Temecula, California, Chief Geromette enlisted in the Navy in August 1997. Chief Geromette completed basic training in November, 1997 and reported to AMS “A” school in Pensacola, Fl, after completion of “A” school he reported to Advanced Composite Repair “C” school in Jacksonville, Fl. NAS Cecil Field. His first tour was Sea OPDET NAS Oceana with deployments on the USS Enterprise December 1998 to May 1999, and the USS George Washington from June 2000 to December 2000. He was advanced to Second Class Petty Officer in May 2000. Chief Geromette was selected to the P-3 Flight Engineer program and reported to NACCS Pensacola, Fl. In June 2002 where he completed Aircrew school, then reported to VP-30 Flight Engineer School.

Chief Geromette reported to VP-10 in May 2003 to March 2008 where he completed three deployments and numerous detachments to various countries across the world. Having flown over 2000 hours, he was looking for something challenging, a tour with the "Old Buzzards" of VPU-1. Chief Geromette next reported to Special Projects Patrol Squadron One in Brunswick, Maine, March of 2008 where he was stationed at NAS Jacksonville, Florida from April 2008 to September 2012. He was selected to Chief Petty Officer in 2009 where he worked as Airframes branch Chief, Electronics branch Chief and was the Avionics/ Armament division LCPO. During his tour at VPU-1 he flew 2500 hours (5000 total), and 15 detachments.

In 2012, Chief Geromette transferred to the Center for Personal and Professional Development (CPPD).  It is here where he taught the Navy Instructor Training Course, was the Course supervisor for Operation Risk Management (ORM), and has taught Drug and alcohol training across the fleet as well as other courses which provided Sailors, at all levels, a variety of skills designed to enrich and develop their professional skills to support the accomplishment of the Navy's mission and earned his Master Training Specialist.

Chief Geromette has been married to Tiffany for 25 years.  They have two children, Katelyn and Cody.